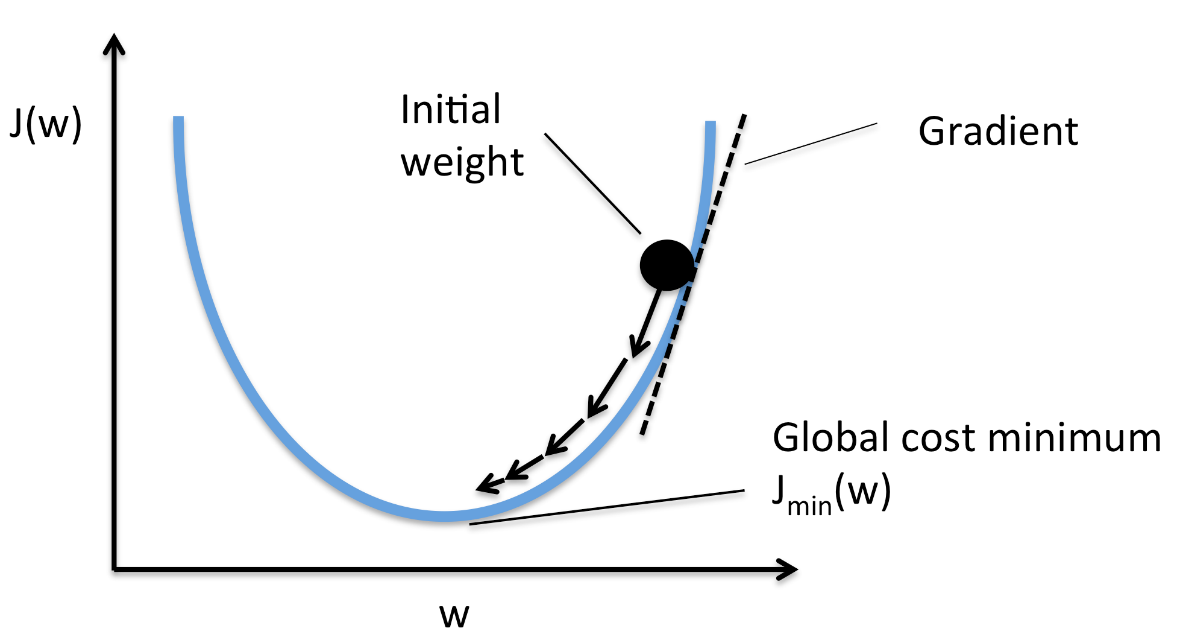 Explain different optimization algorithms that we generally use in Neural Network?

Ans: Optimizers are algorithms or methods used to change the attributes of your neural network such as weights and learning rate in order to reduce the losses. There are different types of optimizers, let us see in detail.

Gradient descent is a first-order optimization algorithm. It is dependent on the first order derivative of a loss function. It calculates that which way the weights should be altered so that the function can reach a minima. Through back propagation, the loss is transferred from one layer to another and the model’s parameters also known as weights are modified depending on the losses so that the loss can be minimized.

It’s a variant of Gradient Descent. It tries to update the model’s parameters more frequently. In this, the model parameters are altered after computation of loss on each training example.

As the model parameters are frequently updated parameters have high variance and fluctuations in loss functions at different intensities.

Now, the weights are updated by θ=θ−V(t).

If the momentum is too high the algorithm may miss the local minima and may continue to rise up. So, to resolve this issue the NAG algorithm was developed. It is a look ahead method. We know we’ll be using γV(t−1) for modifying the weights so, θ−γV(t−1) approximately tells us the future location. Now, we’ll calculate the cost based on this future parameter rather than the current one.

This optimizer changes the learning rate. It will change the learning rate ‘η’ for each parameter and at every time step ‘t’. It’s a type second order optimization algorithm. It works on the derivative of an error function.

A derivative of loss function for given parameters at a given time t.

Update parameters for given input i and at time/iteration t

We store the sum of the squares of the gradients w.r.t. θ(i) up to time step t, while ϵ is a smoothing term that avoids division by zero (usually on the order of 1e−8). Without the square root operation, the algorithm does not perform well.

AdaDelta is an extension of AdaGrad which tends to remove the decaying learning Rate problem of Adagrad. Adadelta limits the size of the window of accumulated past gradients to some fixed size w. In this exponentially moving average is used rather than the sum of all the gradients.

Adam (Adaptive Moment Estimation) works with momentums of first and second order. The intuition behind the Adam is that we don’t want to roll so fast just because we can jump over the minimum, we want to decrease the velocity a little bit for a careful search. In addition to storing an exponentially decaying average of past squared gradients like AdaDelta, Adam also keeps an exponentially decaying average of past gradients M(t).

To update the parameter: