Home  /  Deep Learning Interview questions and answers   /  How do you save Neural Network model in keras once after the training and tuning? 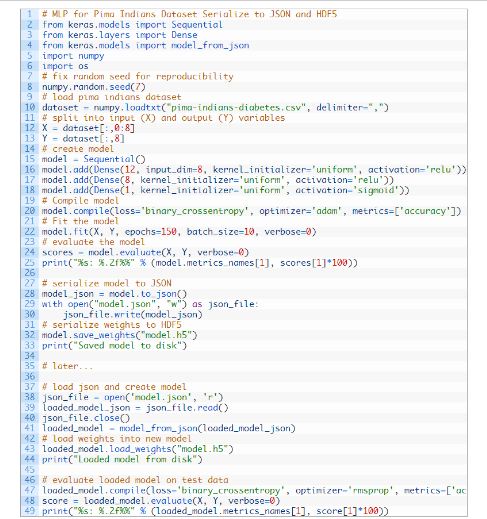 How do you save Neural Network model in keras once after the training and tuning?

Ans: Neural Networks can be saved in keras in two formats which are JSON and YAML formats.

JSON is a simple file format for describing data hierarchically.

Keras provides the ability to describe any model using JSON format with a to_json() function. This can be saved to file and later loaded via the model_from_json() function that will create a new model from the JSON specification.

The model and weight data is loaded from the saved files and a new model is created. It is important to compile the loaded model before it is used. This is so that predictions made using the model can use the appropriate efficient computation from the Keras backend.

The model is evaluated in the same way printing the same evaluation score.

The model is described using YAML, saved to file model.yaml and later loaded into a new model via the model_from_yaml() function. Weights are handled in the same way as above in HDF5 format as model.h5.