Pattern is everything around in this digital world. A pattern can either be observed mathematically or seen physically by applying algorithms. One of the key features that govern any AI or ML project is Pattern Recognition.

What is Pattern Recognition?

Pattern recognition is the method of identifying patterns by using machine learning algorithm. It is the process which can detect different categories and get information about particular data.

Voice recognition, weather forecast, object detection in images, etc. are some of the applications of patterns recognition.

Through learning system gets trained and becomes adaptable to give result in an accurate manner. Learning from the data can tell how the system predicts depending on the input data provided as well as which algorithm is best for specific data. Total dataset is divided into two categories, one is used for training the model called as Training set and the other is used for testing the model called as Testing set.

Training set consists of the set of images which are used to train the system and is used to build a model. Training rules and algorithms are applied on the dataset and the system takes relevant information from the input data, thereby deciding the output that associates with the input dataset. Generally, we take 80% of the data from the dataset for training the system. 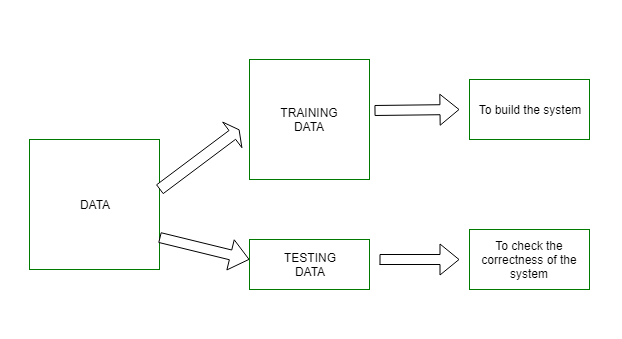